In 1990/91, EMCO, an international company based in Hallein/Salzburg, specialized in computer-controlled turning lathes and laser-/plasma arc cutting machines, planned and built an 'innovation-centre'.

During the planning phase of this building we were invited to develop an interior architectural concept for the art program of the entire public area. A concept that was not simply – as usually – intended merely to satisfy the art-in-architecture requirements of the legislation, but seriously answered in every respect to the company's ambition for an international leading position in this arena.

We designed a steel-construction, twelve metres high, from which two mobile industrial robots with laser cannons, powered by programmed multiphase motors, draw animations in the entire building - on the floor, the walls, the ceiling, and on a mirror system. We were responsible for the design of the object and also for the programming of the music synchronisation of the laser- and the control module – first in our studio in Vienna, and then during the final stage in Hallein, and at LOBO in Germany.

The early involvement in this project made sure that all building measurements necessary for the technical implementation of this work could be scheduled in due time – for example the roof construction of the building had been modified in a way that allowed it to carry the object, which weighed several tons; while in the cellar an extra room was implemented to house the control center for the computer and the water-cooled RGB-laser; from here the robots were controlled and glass fibre cables guided the laser light to the laser projector heads.

Due to the perfect and close cooperation with Emco's engineering and purchasing department, with the staff of LOBO and with the architecture firm Huber as well as the fact that our client Ernst Alexander Maier gave us plenty of rope in all details of our work, we were able to realise this highly demanding project that satisfied everyone who had been involved. 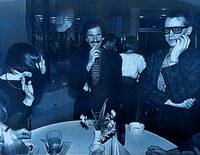