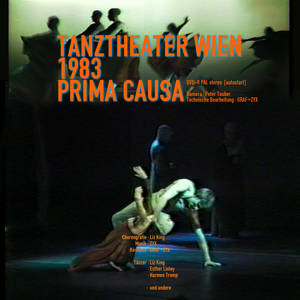 »Prima Causa« – the history of refusal, the aesthetic conflict with the gravity of the unconscious – has been dramaturgically and choreographically conceived as a medieval figuration under the direction of Liz King and Manfred Biskup in 1982. On the one hand GRAF+ZYX made this historical conception stand out visually by their monochrome, puristic costumes, on the other hand they designed for this ethereal ambience  an almost mathematical counter piece for vocals, organ, drums, synthesizer and natural sounds.
»Prima Causa« adresses the interplay of modern electronic music and medieval music; in a very personal interpretation it musically reconciles technical and aesthetic approaches.

Whirring, rustling, twitching,  rattling in the darkness of the fateful night – threatening frequences approach rhythmically and shake the room. This hybrid mixture of strange clanking sounds of nature and synthetically generated movie-background-rumbling will be replaced by a comtemplative progression of the organ, which perfectly simulates spatial vastness. Then, thrown in this desperate loneliness of the nightly space, a man's attempt of vocal self-assertion is to be heard – a haunting melody which gives the piece a disconcerting tone. Identity formation and delineation as discourse of a specific logic of imagination and invention: the self, hopelessly entangled in the role play between dissociation, multiple identity and multiplicity. In the course of this musical plot, the male actor's conflict dissolves, he mutates into a croaking entity, shrinks, becomes reduced, and in a whisper transforms itself into the id – he himself becomes a transcendental component of a mystic, uncontrollable setting.